Our monastery is the fruit of a long history. One hundred and sixty-five million years ago, when the sea still covered our regions, the yellow ocre stone called “pierre de France” was already forming in the depths of these waters; later, it would be used in the construction of the monastery Fifteen thousand years ago the valley destined to receive the monastery was being hollowed out by the effects of the last Ice Age.

Three thousand years later, the first trees began to appear, woodland pine, birch, and beech; a whole forest which man began to clear between 1800 and 1200 B.C. Was there any human habitation or village on this site before the monks settled ? At the present stage of research, nothing proves it. Only Merovingian tombs have been discovered in the surroundings of the spring.

The first monks to settle in Orval arrived from the south of Italy in 1070. Count Arnould de Chiny, lord of the manor, welcomed them and granted them land from his own domain. Construction was immediately begun of the church and conventual buildings.

For reasons we do not know these pioneers moved away after about forty years. Othon, son of Arnould, replaced the monks by a small community of Canons who were able to complete the construction work begun by their predecessors ; in 1124 the completed church was consecrated by Henri de Winton, Bishop of Verdun. Soon afterwards, however, the Canons ran into economic difficulties, a situation which led them to request affiliation to the Order of Cîteaux, at that time in full expansion. Their request was transmitted to Saint Bernard who accepted it. He entrusted the re-establishment of Orval to the eldest of his daughter-houses, the Abbey of Trois-Fontaines in Champagne.
On the 9th March 1132, seven monks under the leadership of Constantin arrived at Orval from Trois-Fontaines. Monks and Canons formed one single community and began at once on the adaptation of the buildings to Cistercian usages. The new church was completed before 1200.

The Cistercians were particularly careful to establish a farm and a forestry domain ; these forms of work would allow them to live according to their observances. The land immediately around the monastery is poor and unsuited to farming. As early as 1132, the monks received a small domain about 20 kms. from the monastery near Carignan ; this was to become the hub of their finest grange, that of Blanchampagne. In the following years, the monks received further land in donations. Of these lands, mention must be made of the group of Bure-Villancy, in the Meurthe-&-Moselle region, which would be the centre of OrvaI’s iron industry.

For five centuries, Orval led a hidden life, like so many other monasteries of the Order. During the 12th Century, the abbey seems to have been prosperous ; from the middle of the following century, calamities were often to be its lot for long periods. In 1252 the abbey was gutted by fire and the consequences weighed on the community for almost a century. Certain buildings had to be entirely reconstructed. So serious was the state of misery that for a time the authorities of the Order went so far as to envisage the suppression of the monastery. 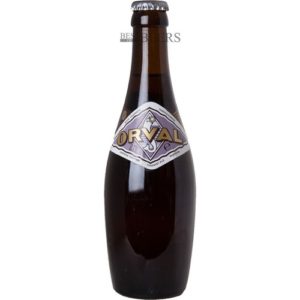