It all began when Jan-Léonard Moortgat and his wife founded the Moortgat brewery farm in 1871. Around the turn of the century, Moortgat was one of the over 3,000 breweries operating in Belgium.

Jan-Leonard experimented by trial and error, and his top-fermented beers were soon greatly appreciated in the brewery’s home town of Puurs and far beyond. Before long, the Brussels bourgeoisie was also won over by his beers.

Business was booming and Jan-Leonard’s two sons, Albert and Victor, joined the company. There was a clear division of labour: Albert became the brewer, Victor was responsible for delivering the beer to Brussels by horse and dray.

The First World War brought Belgium into contact with England and especially with English ales, which were quite popular at the time.
Inspired by the success of English ales, Albert decided to create a special beer based on the English model.

To create this type of ale, Albert wanted to work with only the best ingredients.
He travelled to the UK to get the specific strain of yeast he wanted and initially met with considerable resistance from the local brewers. It was only after a veritable odyssey across England that he was finally able to get his hands on a precious sample from a Scottish brewery. Our yeast is still cultured from the very same strain to this day!

The two brothers continued to search and experiment until they had perfected the recipe.
To commemorate the end of the First World War, the new beer was initially dubbed ‘Victory Ale’.

This innovative beer was a real revelation to one and all. During a tasting session for local notables, the shoemaker, Mr. Van De Wouwer was so amazed by the beer’s potent aromas that he exclaimed: ‘This is a real Duvel (Devil).’
A spark of divine inspiration? From 1923 onwards, the beer was marketed under this name, a far from obvious choice in the devoutly Catholic Flanders of the time.

Everything about this beer was different. And that aroused interest, even internationally.

As Duvel’s international status grew, so did its production levels. The Netherlands was the first country to be conquered by this speciality beer.

The 1960s saw the launch of a younger brother to the traditional Duvel, called green Duvel. It was only fermented once, making it a little lighter and it became a roaring success in the bars and cafés close to the brewery.

The third generation of Moortgats (Bert and Marcel Moortgat, and the two brothers Leon and Emile Moortgat) were convinced that a unique beer deserved a unique glass. In the late 1960s, the Duvel glass became the first tulip-shaped beer glass. This innovative glass, reminiscent of a wine glass, had to be able to hold the contents of an entire 33 cl bottle. Up until then, there had never been such a large beer glass. The glass is specifically designed to offer a more complete experience of the beer. The rounded shape allows Duvel’s exquisite flavour and aroma to be fully experienced by the drinker. The way in which the glass narrows towards the top also helps retain the carbonation, therefore preserving the head.

The Moortgat family, continuously invested in the brewery so that they could always guarantee the beer’s perfect quality. Thanks in part to these efforts, Duvel has gained worldwide acknowledgement as THE standard for bottle-conditioned ‘special’ beer.

In 1923 the production of Duvel began with just a few crates. Today, Duvel is enjoyed literally all around the world (in over 60 countries) by countless beer lovers. The beer is still brewed with profound respect for the original recipe and the time it needs to mature. 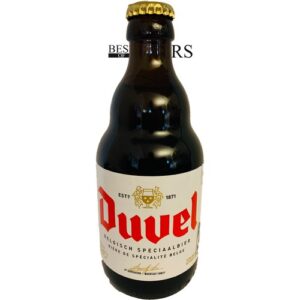